VicForests and members of the timber industry were deeply saddened to hear of the recent passing of Robert ‘Bob’ Humphreys (of Hallmark Oaks).

Many VicForests staff worked with Bob and those who had the privilege of knowing him will remember him as an extraordinary and exceptionally generous man.

He was highly respected and will be remembered for his long and significant contribution to the native timber industry with a sawmilling career of more than half a century.

Bob was in his 52nd year of sawmilling in East Gippsland and during that time his company reached a peak of five sawmills, 77 employees and processed 65,000 cubic metres of sawlogs annually.

Bob was a former president of VAFI and was a member of the VAFI Executive Committee member up until his passing, contributing greatly to the forest and wood products industry.

His loss will be felt throughout the industry, especially in East Gippsland, and in particular the Cann River community.

He will be deeply missed and VicForests extends heartfelt sympathy to Bob’s family, friends and the Hallmark Oaks team. 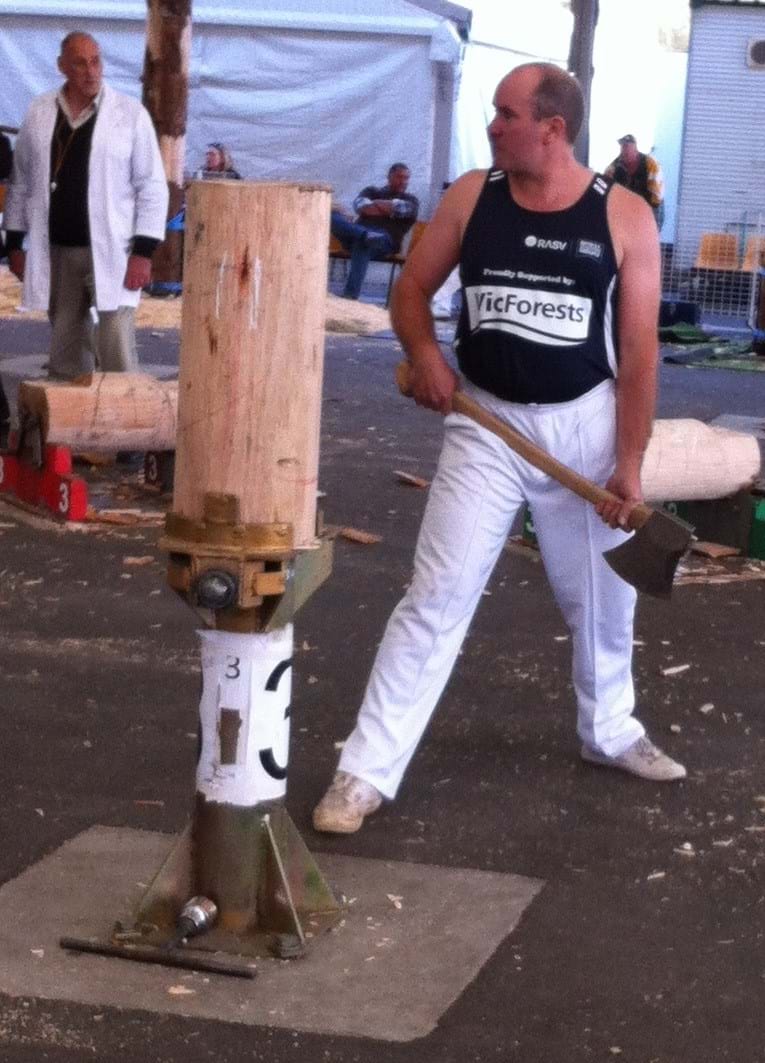 VicForests is sponsoring the woodchop at this year’s Royal Melbourne Show.

VicForests will have an information booth in the Woodchop Pavilion where forestry staff from all over the State will be available speak with the Show goers about VicForests' operations.

Information about the forestry cycle and wood samples are all part of the display with a range of native seedlings also to be given away.

VicForests is very proud to again be part of the woodchop which has been popular attraction at the Show for more than 100 years.

The 2015 Royal Melbourne Show is on from September 19 – 29 with woodchop events taking place each day from approximately 10am to 5pm. VicForests staff will be at the information booth from Saturday, September 19 to Wednesday September 23.

If you’re visiting this year’s Show, come down and say hello to our staff!

VicForests’ staff and contractors heard a moving and powerful reminder on the importance of keeping safe at work at a recent seminar in Traralgon.

Guest speakers, Wiremu and Marsella Edmonds of New Zealand, lost their son Robert in a tree-felling accident in 2013.

Mr Edmonds, a fifth generation forest worker, and his wife travel the world to share the story of their son, who died while working in the forest.

Since the incident, the couple have dedicated their lives encouraging people to raise concerns if they believe something risky is happening in their workplace.

Mr Edmonds urges others to learn from the death of his son which he believes was preventable with safer work conditions.

The couple want people to speak up when seeing others or themselves take risks and short cuts, which they refer to as ‘standing in the gap’.

Nathan Trushell, General Manager of Planning said the Edmonds’ message was confronting and a very personal story about what can go wrong and the impact on loved ones.

“The Edmonds’ story is one of tragedy and also strength and courage and for everyone to ‘stand in the gap,’ to make workplace safety a priority,” Mr Trushell said.

“VicForests strives to improve safety practices and remind people that a job in forestry can be, and often is, dangerous”.

VicForests also invited Julie Rae, Head of Information and Research from the Australian Drug Foundation to speak about drugs and alcohol in rural communities.

Ms Rae co-authored an ADF submission into a Parliamentary enquiry into the drug Ice and will focus on this substance devastating communities.

VicForests held its annual Contractor Dinner to celebrate the achievements of its contractor fleet over the last 12 months with awards being presented in the categories of safety, professional and stakeholder engagement.

The awards were presented after the safety presentation on Friday, September 11 at the Quality Inn in Traralgon.

Contractors listened to a pre-season briefing with a focus on VicForests’ safety targets, value recovery initiatives, sawlog targets and markets.

Contractors, senior managers and directors were invited to celebrate the achievements of VicForests’ contractors for 2014-15.

Wheeler and Sons Pty Ltd was awarded the Harvest Contractor of the year.

Brindle Wheeler of  Wheeler and Sons Pty Ltd was a regular participant in the contractor OHS committee, reported nine incidents and had their safety management system audit rated as fully compliant (green) for the last two years.

Brindle Wheeler also supplied 143 per cent of contracted supply level and had 98.5 percent of wood supplied in specification.

MJ & MJ Brady Pty Ltd won the Haulage Contractor of the year award. They have two contracts with VicForests and finished first and second in the overall ranking system which measures performance across all of the criteria.

Robin Logging Pty Ltd won the Safe Contractor of the year award for achievements gained against their systems audit.

The Community Engagement award was given to ForestRee Pty Ltd. Sue and Robin McKinnell representing ForestRee Pty Ltd were recognised for their great support at several community events and have assisted with numerous wood donations. Robin is always thinking of new ways to explain the work of VicForests and last year brought an entire tree to key events. The tree was cut into various grades and it was a great way to show the public how VicForests' harvested timber is used.

VicForests staff were part of the team that located a missing hiker in the Baw Baw National Park in late August.

Zach Dorman, Adam Schwebel and Trevor Nicklen from VicForests’ Erica office along with staff from the Department of Environment, Land, Water and Planning and Parks Victoria joined the search to find the hiker after she had been missing for nearly 24 hours.

VicForests Operations Forester, Trevor Nicklen, said staff from VicForests, Parks Victoria and DELWP were asked to assist because of their local knowledge of the area.

“The people working in that group have good forest skills, with mapping, bush walking and navigation,” he said.

He said walking conditions were difficult due to around 60cm of snow and the temperature about 3 degrees.

“We found footprints around dusk that led off the alpine walking track and we started to follow those footprints.

“We followed them for 1km until we called out and made contact with the hiker.

“She was quite excited to see us as it was getting dark and she was anticipating another night in the wilderness,” Mr Nicklen said.

Mr Nicklen said the missing hiker wasn’t familiar with the terrain and once she realised she was lost, she didn’t move. He commended her decision to stop walking and wait to be found.

“She was visibly exhausted but still in good spirits,” he said.

The team from VicForests, Parks Victoria and DELWP gave her food, drinks and warm clothes.

After half an hour of rest, the team helped to slowly walk her back to the alpine walking track where they were met by the Police Search and Rescue team.

Well done to Trevor, Zach and Adam as well as the staff from DELWP and Parks Victoria for playing their part in helping to ensure a safe and happy outcome.

Do you know where your firewood is coming from?

The spring domestic firewood season is now open for the community to collect supplies within State forests until November 30.

People can only collect fallen or felled trees and any firewood collected must only be used for domestic purposes only and not sold commercially.

Alternatively, consumers can purchase their wood from commercial firewood retailers who are allowed to sell to households through the year.

VicForests' Manager, Community Foresty, Bill Paul, is urging the public to think about where their firewood comes from.

“Many retailers of firewood source their products from a variety of State forests and private land and can provide assurance that the wood has been harvested in a legal manner with the permission to be sold on commercially.

“It has however been reported that a number of people may be collecting firewood illegally and then selling it without the correct licenses or permissions to harvest,” he said.

VicForests is responsible for the management of commercial timber harvesting operations in State forest across Victoria.

In the west of the state, a principle component of these operations is the provision of areas for licenced commercial firewood harvesters.

Mr Paul said that licenced firewood harvesters take timber from the forests either through the collection of material left over from previous larger scale harvesting operations or through a managed thinning of the forest. This material is then split, dried and stored ready for sale to the general public.

“Prior to harvesting, VicForests undertake a rigorous planning and engagement process to ensure that all operations are compliant with relevant laws and codes of practice whilst also being sustainable and safe.

“Commercial firewood harvesters are required to comply with these plans at all times as well as being accredited for any tasks they may undertake.

“To assist the long term sustainability of our state forests, it is the responsibility of everyone to ensure that these resources are being managed appropriately and purchasing your firewood from licensed commercial firewood harvesters is one way of doing this,” Mr Paul said.

For more detail go to www.delwp.vic.gov.au/firewood or if you wish to report suspicious or suspected illegal activities in State forests please ring the Department of Environment Land Water and Planning on 136 186.